Last week marked my third trip to Pulau Tioman and my second time on my school’s annual field trip for environmental science students. I am still very much a high school graduate, thankfully, but every year the trip takes two teaching assistants with it to manage, maintain, and distribute equipment. A close friend and I volunteered for the roles this year. Even if it meant four hours the night before organizing tubes and water quality kits, five days on Tioman is difficult to turn down.

The island, located off the coast of Malaysia, was named one of the world’s most beautiful by Times in the 1970s. Since then it’s been flooded by tourists—divers, snorkelers, people looking for a weekend beach getaway from Singapore. Still it retains a feeling of isolated wild—it remains a rainforest island.

And that feeling is why people come, because on the surface, approaching in a ferry or looking up from the beach, Tioman glistens unblemished green. But this means the forests, especially those by the sea, are heavily visited. Tourism often crosses the border into exploitation here, as ATVs rumble up and down the paths, large trees become picnic spots, and freshwater streams become bathing sites. It is the familiar balancing act between development and preservation.

So when we hiked into the forest, our path’s edge was marked by thick black water pipes. In some places the pipes were old enough, mossed enough, that you could nearly mistake them for lianas, but not quite. In their shadows, peacock ferns glimmered blue, evolved over centuries to photosynthesize from the hazy green reflection of forest floor: a more commensalistic relationship than the anthropogenic one. Only further up the steep slopes, unreachable by casual tourists, do the forests relax into a truer wild—close to the coast and the resorts, they exist for consumption. Even still, when we visited those freshwater streams we spent fascinated minutes examining the weird wriggling forms of dragonfly nymphs and dozens of transparent shrimp hiding under the rocks, next to the plastic food wrappers left by visitors and the artificial shower of a broken water pipe—ecosystems cycling just beneath the surface.

My favorite parts of Tioman lay there. On our first afternoon, we went snorkeling out to the house reef. The advantage of being a teaching assistant is that I’m no longer required to wear a life jacket by school safety standards. When we reached the small corals—branched staghorns and whorled brains—I dove down towards them, passing through brilliant blue schools of fish like air. For a moment I hung unanchored to ground, to surface, to world. It was easy to forget I could not stay among those colors forever, that I had to return to oxygen.

Later I saw a turtle mimic my same journey with much more skill—watched it duck its head out of the water, small and wrinkled, for a moment just within reach, and then turn and in one fluid motion sink down, down, down into the deep blue. I tried diving after it, over and over, while it fed on corals at the sea floor some ten meters below. But it did not come up like I had to, over and over, because the water was its world, and not mine. In the end it descended out of sight, its dark body inked into ocean.

One night the water came to meet us. An intertidal survey is routine on these trips, but the low tides during the days we were there all left us too wet to conduct any real work. In the end we decided to hold the survey during the midnight low tide, and dragged students out of bed at 11 PM to put on still-damp water shoes and cram their phones in Ziplocs collected from every corner of our makeshift classroom.

Low tide turns the sea inside out. Students gasped when they came onto the beach and saw the rocks stripped open, gleaming like bones beneath the sky. I wandered with a torch among them, kneeling near rock pools and watching the fish swim into reach. Gobies darted in and out of their depressions in the sand, disappearing in silt clouds as soon as a curious eye poked out. Small fish with bodies outlined in fluorescent markings hovered frozen when you got close. Two pufferfish had been left behind and sat, marooned, in shallow water. Their fat bodies and large eyes seemed out-of-place now that they met atmosphere, where underwater their oddity seemed only natural among the foreign forests of coral.

We came across crabs, too, darting from shadow to shadow, plump sea cucumbers, curled in on themselves like question marks, an octopus out of the water. The incongruity of the latter stopped me in my tracks. I illuminated its round eyes, its bulbous head, its slimy body in turn. It seemed so inelegant. Its tentacles sprawled like ropes, curving unnaturally over the rocks: how could something like that move? Then I turned to call my teacher to see it, and when I looked back it had vanished into the dark. Later, when we came across another in a pool, it slipped fluidly from one end to the other as if part of the water.

By the end of the survey we had walked all the way across the rocks to where the corals began to bloom. We found a catshark there; the waves—stronger here now we had touched open ocean—disembodied the fish to dappled geometry. We watched it twine through the pools, coming meters from our feet, drawing intricate spirals across the water. Its white-spotted back echoed the stars above. I looked out: on the horizon the black sea and the black sky melted together. For a moment, there were no edges anywhere, and all that was left behind was the world. 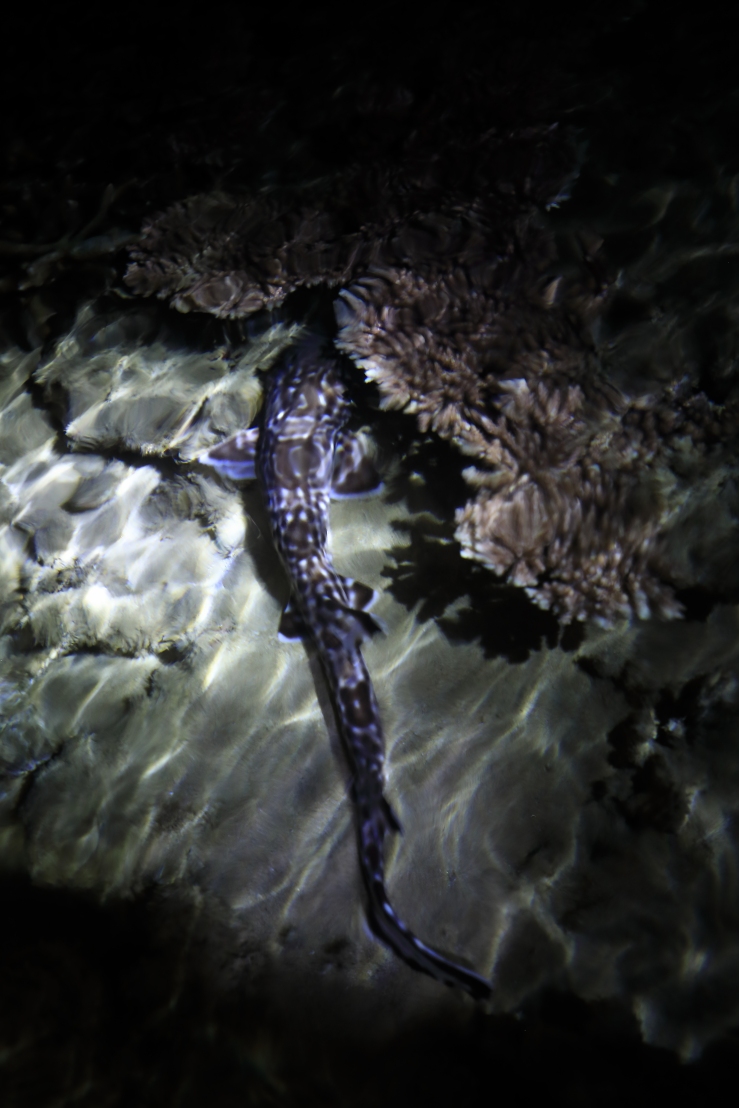 1 thought on “Beneath the Surface: Gap Year Week 11”