Our first morning in Selous Game Reserve, and I’m buttering my toast with intent. I’m trying to spread the rocky butter evenly but I’m only succeeding in leaving intermittent lumps on the bread, and I’m frowning at it, when the elephant walks past.

He’s barely five meters away from us—on the path outside the dining area—and we can see his skin, vast and mottled, the bright contour of his tusks. He stops and drops his trunk to delicately finger a single palm fruit that has fallen on the path. He picks it up with care, raises it as if to taste it, and then drops it, almost with disgust. He snakes his trunk up to the fruits hanging above, but after touching them decides to ignore them to. Then he turns and walks away, past the jeeps waiting for the morning safari, past the car park.

The entire thing has taken no more than two minutes. You people, his indifference seems to imply, are merely bystanders to what is actually worth paying attention to—my breakfast. You people, he seems to say, are secondary here. You may as well not exist.

Needless to say, the toast has been forgotten.

When we leave Dar es Salaam in still-dirty hiking boots in a small 12-seater plane, we fly over land mottled with trees, gouged irregularly with the dark remnants of fire, occasionally bending into a green hill or valley. We do not pass a single straight-edged thing, whether billboard or building or road, for half an hour, till we clatter down onto the runway. Selous is the largest game reserve in the world—an oft-cited statistic places all of Switzerland comfortably within its boundaries, which enclose 21,000 square kilometers of land where no permanent human habitation is permitted. If this is not wilderness, what is?

Selous, however, does not feel vast. Everywhere we go in the next five days our horizon fills in with the dense thickets of date palm, thick thorny bush, blue hills in the distance, green lakes in the foreground. Our gaze is not drawn out, but in. We spend a lot of time looking for birds (final count: 102 different species) and in this fashion we use hours examining fields where the grass has been brutally stripped down to coarse stalks, spotted with the smoking gun of the droppings of a herd of buffaloes. We find three Temminck’s Coursers here, one with a broken leg, darting and then stopping across the ground in an odd quick dance. Once, we see the buffaloes themselves—hundreds blinking at us without curiosity in the middle of a hot afternoon, their horns curling upwards like a grace note.

We look closely at the stiffly held date palms, lined up by the riverbanks as if summoned for military roll call, and their ochre beards of dead fronds. On a boat ride, we find that they are filled with awkwardly large stork chicks—all fluff and loud keening calls for their parents. We dissect dead trees to minutiae (no, the bird on the left branch), their gray dried skin filling our binoculars: branches held in odd contortions forever by the sudden sweep of water from a flood decades ago. By the river, the sharp form of Pied Kingfishers sit frozen before suddenly arrowing downwards to the water.

In the bush we become familiars with the different thorns—the long ivory points that rake our windows sinisterly, the searching twiggy branches that produce cutting splinters when touched, the wide sharpened teeth that appear in a sharp burst of pain in our feet—and the black-and-white Common Fiscals that perch atop them, ready to impale a hapless lizard. On a boat trip we come so close to a Malachite Kingfisher our stern touches the branches it rests on and we could reach out and touch its proud orange breast.

Far from the dramatic, wide spectacle of the Maasai Mara, we find in Selous a landscape of extraordinary intimacy. The intimacy also comes from our isolation—there are 12 camps within the reserve, spread across a large area, and none with more than 50 guests at a time. The dry afternoons and expectant mornings and bright sunsets belong to us and us alone. What might be intensified by the presence of ten other vehicles and a hundred more people holding their breaths and taking pictures in a collective voyeuristic excitement instead melts away into the heat waves and we observe only the unvarnished reality.

We are alone as a lion yawns in the evening, dusk light caught in its mane. Its teeth are spotted with brown and flies buzz around its head; it makes no move to shake them off and instead yawns again. Beside it, another male lion—likely its brother—is belly-up and indolent, paws scratching the air. We can see every pad on them, can see the scars on their faces, the grass caught in their fur, can see their ribcages, in and out, can even hear their deep breaths in the silence. These are the masters of this world. We cannot dispute their golden power.

And we are alone, too, when ten meters away vultures clamber on top of each other to get at a dead impala, likely abandoned by a leopard no more than half an hour back. In the air is only the smell of the ruptured stomach—fragrant and fetid—and the rough scrapes of beak against bone and the hard purr of the hundreds of birds waiting for a chance scrap. Occasionally a vulture squeals when one places a foot in its face or a Lappet-faced Vulture barges in. By the side, a Marabou Stork watches on its knees, solemn and sad, its filthy beak almost touching the ground.

The violent consumption before us feels almost sacrilegious to watch in its closeness, the single-minded focus scary in its intensity and indifference to anything else. This will happen with or without us. When a hyena comes, though, the vultures scatter in an irritated storm of wings and screeches. The animal’s fur is ragged with mange. It plunges its face into the ribs of the impala over and over, only stopping to look up and out behind us, at a copse of trees where the leopard must wait. Its muzzle is rose-stained. Here, too, is wild, and here, too, is beautiful. The hyena looks around once more and then yanks a piece of meat off, hurrying away, passing so near our jeep we can see the sores on its skin.

But this wilderness is paradoxical. Selous is best known as a hunting reserve: it exists in this expanse because of human consumption of its wildlife and human desires to possess it. When hunting companies were banned in recent years for ethical violations, poaching ravaged its once-famed elephant populations, devastating nearly two-thirds over half a decade as government officials colluded with wealthy Chinese. As we marvel at the open curiosity of a giraffe’s large lash-ringed eyes, our act as witness, too, means something to this landscape, as tourists and consumers with the power to preserve and demolish alternately. Moments later the giraffe turns and bounds away with long slow-motion strides. We do exist here. We are not apart, and from above and below and around humanity presses inexorably on this gorgeous, gruesome land where the age-old cycles play.

On our last night in the reserve, before we begin the long flight back to Singapore, I set up my tripod on the veranda of our tent to photograph the stars. The Milky Way touches the tops of the date palms; the hippos grunt from the lake just behind. I am focused on adjusting settings, heights, trying to remember in pixels the vastness of the stars for when I do not have them anymore. As I start a thirty-second exposure, rustling comes from the bushes and I sweep my torch over the ground in front of the tent. Four elephants are walking past, great and gray. I sit and watch: one young calf hurries alongside, its over-large head balanced awkwardly, and I’m in Tanzania, watching elephants under the stars, and what could be more idyllic?

When they move out of sight, I return to my camera, and begin scrolling through my pictures, trying to figure out which to delete. I scan the date palm in front, trying to gauge how far away it lies to adjust my focus. As I squint at it, another elephant emerges from the dense bush next to it without warning, larger than the rest and with huge tusks gleaming in the light of my torch. He turns towards the tent, his amber eyes staring right at me. His tusks look even sharper from this angle.

A flame of primal fear licks up my throat—all his size, all his power pointed in my direction. I leave my camera and tripod and run inside the tent, my ears strained for footsteps in our direction, my heart beating fast. I sit, breathing hard, for minutes, trying to recall the ancient feeling that had welled up, of being small, fragile, in danger faced with those larger than myself. Of being not apart or above but subject to the same cycles as everything else. Of human meaning nothing more than some odd primate upright through evolutionary quirk. I fall asleep that night thinking of that, watching the stars through the chinks in the curtains as they continue their tender universal dance. 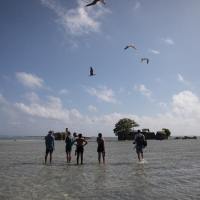