I am now two weeks and three countries into my gap year. The last eight days were spent in Sri Lanka, where my extended family—aged three moths to 77 years—gathered for a holiday. Over the trip, we circumnavigated by the country by bus, boat, and seaplane, from the coast to the hills. I took over 1800 photographs, saw 101 bird species, including 15 endemics, and ate far more than I’d like to number.

But beyond the numbers was a country familiar and unfamiliar all at once. Used as I am to Southern India, at face everything appeared the same but diverged regardless: hoppers at breakfast instead of dosa; Buddhist temples instead of Hindu; smaller trash-heaps by the roadside. Conversations in languages with familiar cadences but meanings chasms away; roadside landscapes filled with so many more trees but the same paddyfields; the morning chorus of the hanging-parrots’ flight issuing from a different but too-familiar bird. But over three different national parks, I realised the feeling of being in a forest in the morning doesn’t change, no matter where you are. Over this next year, no matter what happens, I hope I’ll always have that kind of peace that comes among the trees while the world wakes up to itself—the feeling that everything is exactly as it was, exactly as it is supposed to be. Even if the birds remain stubbornly silent and the leaves reveal nothing—even still, the filigree of leaves against a whitened sky, a spider web cast in diamonds by dew, brilliant flowers brightened by sun, all remain to discover. There’s always something new, even if it’s not what you’re looking for, even if each discovery is not flushed with the adrenaline of drama but rather the soft thrill of witnessing drawn out over time. For example: a troop of endemic purple-faced leaf monkeys cascaded down from branch to branch, leaving resounding crashes in their wake, and three paused on a bare tree, and stared down at us with dark eyes; a baby, with inexplicably small fingers, clung to one tightly. For example: a Sri Lankan giant squirrel, hurrying up and down a branch, its thick bushy tail nearly the full length of its body, its snout small and sharp, tiny soft ears twitching every way as Tocque macaques neared. For example: the materialisation of a Sri Lankan birdwing butterfly, large and black and yellow and flying on muted wings, far above, the largest butterfly in the world, within vision, within knowledge. For example: a pit viper curled statuesque on a branch, glistening with rainwater. 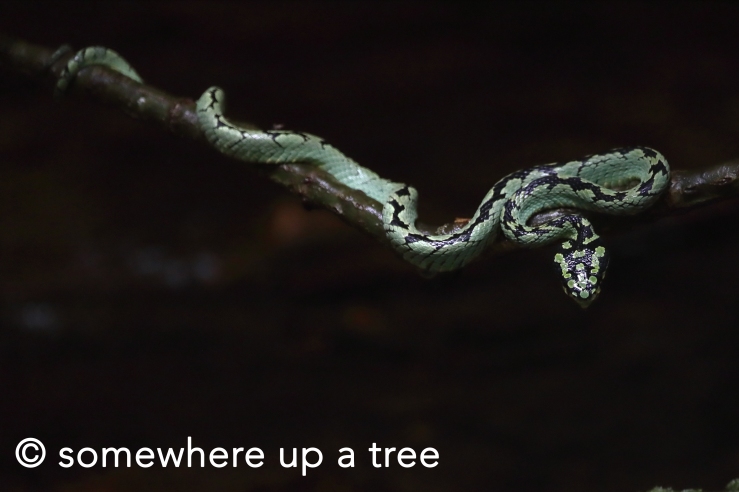 The sighting I will remember longest is one that took place in total quiet. We found it curled upon a rock by the path, the unmistakable thin green body of the vine snake. The rest of the group walked ahead: the snake was not moving, but I stayed, examining the gentle undulations of its body. I traced it down to the head, hidden in the shadows and then—it had caught a kangaroo lizard in its mouth, held firmly around the neck.

As we watched it, the snake withdrew from the shadows. The lizard, whose head was clearly at least twice the size of the snake’s, kept opening its mouth to reveal a small globular thing at the base of its jaw. It wasn’t gasping for air, but going through the motions, mouth open, mouth close, robotically, as if the mechanical nature of it meant living. But the snake’s fangs were firmly embedded in its prey and so too its venom—not fatal to humans by any means, but enough for a small reptile like this. The venom, however, is slow acting, and minutes passed as the lizard stared blindly upwards, still gaping at wider and wider intervals. The forest around had fallen silent while we crouched there, eye level with the two creatures locked in an inevitable, frozen struggle.

Finally, with little fanfare, the snake opened its jaw impossibly wide and tenderly maneuvered the lizard’s head into its mouth. The lizard no longer stirred, its thin arms dangling, fingers curled in, and the snake opened its jaw again and again, nudging its head in bit-by-bit, mouth, eyes, cheek disappearing. Gentle, but inexorable. The simple act of consumption. Piece by slow piece.

We left the snake then, and almost immediately came across another kangaroo lizard, but this one running across the trail, and up a log. It stood at the top and bent its head towards us. It’s tempting to look for some deeper meaning there, but all the forest gives you is facts. And here was the fact of the alive, and the dead close behind, and the forest dawning, again, and again, and again. The things you do not know are made of the pieces you do. Some things never change. It all cycles back. 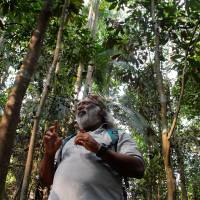