Apologies for the nearly-seven day gap till the second day of my ‘seven photographs in a week!’. I begin again on Day 2 with new resolve to actually post a photograph every day for the next… five.

Today is a photograph I took in the Western Ghats last summer at sunset. There’s an extraordinary peacefulness in the hills as twilight falls – a silence pregnant with possibility but also a silence content in itself. This evening, when this photograph was taken, was one that definitely lent itself to contentment: moments before this photograph, we had seen an elephant, miles away on a hill opposite. It was a big bull, lumbering heavily across the sholas, scarred, leathered skin. I looked down and at my feet was a puddle of tadpoles, swimming in circles with determined intensity in apostrophes and checkmarks, punctuating the water – the small and the large, within 360º.

Later that evening we saw a flying squirrel scamper over the night roads. I slept that night happy in myself and the cicada’s constant lullaby. 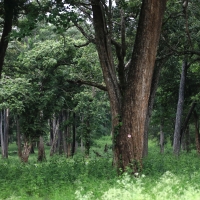