Believe it or not, there are actually butterflies smaller than 5 cm. There are some pretty crazy tiny butterflies– some that could be still concievably seen as a conventional, brightly colored butterfly, and others… not so much. 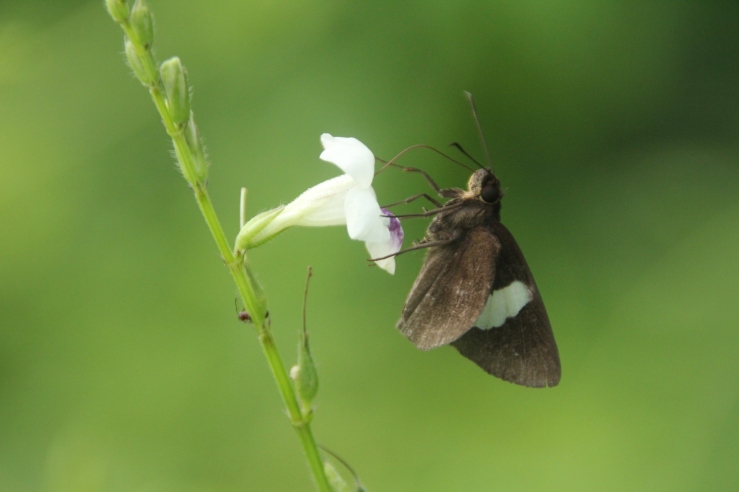 Banded Demons, though common, aren’t normally seen in urban areas, preferring nature reserves, especially areas around spiral ginger. They belong to a group of similarly-shaped butterflies known as the skippers, often mistaken as moths, because (gasp) they’re brown! What else could they be? I mean, brown! And in fact, they’re closely related to a group of butterflies called the moth-butterflies, whose morphological feautures toe the line between moth and butterfly. But these ones are butterflies for sure– their clubbed antennae prove as much– and while they might not be as flashy as some of their cousins, they are certainly as interesting. Notice the proboscis probing the flower for nectar in the first photograph, and the tiny, barely visible dot towards the end of its wing: that’s the only distinguishing mark from it and other, similar species. They tend to be found in groups of adults, moving very quickly from flower to flower, as I saw as I spent about 10 minutes trying to get a decent photograph of one.

But my frustration as their quick flight is really frustration at their name: they ‘skip’ from place to place, and they’re not named after a nautical… well, thingummy, as I initially assumed.

Have you got more information on these fascinating bugs? Any other butterfies that don’t really look like the conventional image? Tell me in the comments!

Back at you, Lavanya. Can’t wait to see what you have.